By
Ashley Ross and Mutaz Bawaneh 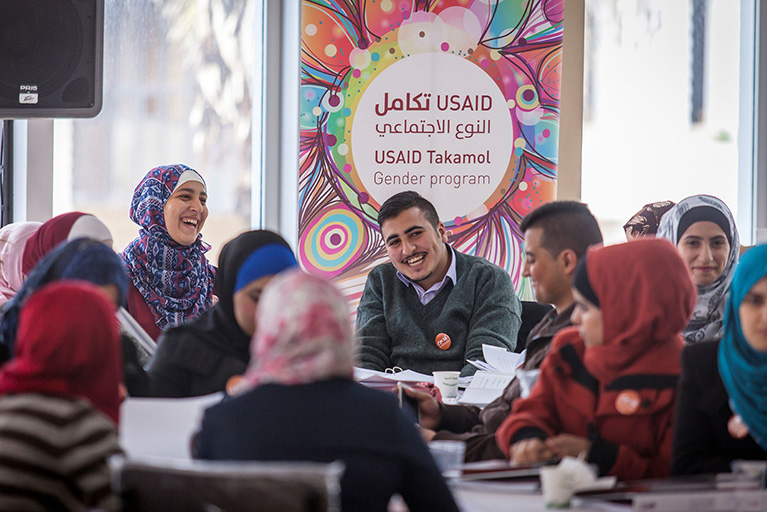 Around the world, it is common for international collaborative efforts in support of women’s empowerment and gender equity issues to be derided by skeptics as part of a foreign agenda to change local culture. In Jordan, such skepticism is compounded by public discourse on gender issues that is often reduced to discussing international conventions, or specific inequities that attract media attention. As a result, gender equity issues can seem detached from the daily lives of most Jordanians.

To address this, IREX has worked closely with partners in Jordan to apply a local lens to gender issues through the USAID Takamol program. Since 2014, the program has dedicated time to understand nuances of the local context and adjusted resources, framing and concepts accordingly.

IREX has drawn upon seven years of experience in fostering dialogue about gender norms in Jordan to publish the Gender Resource Manual: Terminology, Core Concepts, and Exercises for Gender Training, a guide to teaching key gender-related concepts for a diverse Jordanian audience. Using the techniques in this manual, also available in Arabic, USAID Takamol has held trainings and discussion sessions on gender concepts with Jordanians, including high-level government officials, students, mothers who work from home, religious leaders, and civil society activists.

Here are three lessons on how to foster gender discussions that are locally relevant and rooted in local value systems:

Many languages do not have a direct translation of the word gender, this fuels claims that it is a foreign concept. However, the central idea behind the term gender—that the roles and expectations it describes are socially constructed, and thus responsive to efforts for social change—exists around the world, and local gender champions have long applied their creative talents to craft resonant translations.

A central issue in localization for Jordan was deciding which of two Arabic options of the word gender to use. For many years, USAID Takamol used the most common translation of gender used by the Government of Jordan and UN agencies, an-nw’ ijtimaiya (النوع الاجتماعي). The literal translation means a social type or category and it does not fully encompass the meaning of gender in English. Instead, it can obscure the range of power dynamics related to gender roles, as it references social but not political or economic aspects of equity and inclusion. It also overlooks the feminist insight that gender roles and expectations are linked to a hierarchy of values, in which women and the feminine are subordinate.

The alternative is the transliteration (al-gender). Over the past decade al-gender is commonly used in spoken and written Arabic, creating familiarity with the term. However, USAID Takamol has found that with some audiences, using al-gender rather than an-nw’ ijtimaiya fosters deeper and more transparent discussion of the full meaning of the concept. Using al-gender, especially when introducing foundational gender concepts, supports the acknowledgement of historical background, meaning, and implications. As a result, USAID Takamol has found that using an-nw’ ijtimaiya is most appropriate for audiences such as senior government officials and partner institutions whose gender mainstreaming mandates the use of the term. When training government staff such as designated Gender Focal Points, USAID Takamol found it fruitful to explicitly discuss alternative terminologies for gender and in this case al gender is a more comprehensive term.

2. Use personal stories and proverbs to show how gender intersects with daily lives

Storytelling is one of the most effective means to convey abstract concepts in ways that audiences find both relevant and memorable. To encourage Jordanians to reflect on how gender roles and stereotypes affect girls and boys, women, and men of all walks of life, USAID Takamol designed a range of in person and online activities rooted in storytelling. The Gender Resource Manual distills these approaches into exercises that guide participants to consider how gender norms shape roles, expectations and opportunities in their own lives, families, and communities.

Faces of Takamol is a Facebook page that sparks dialogue by personalizing a wide variety of gender equity themes through interviews with diverse Jordanians whose lived experiences challenge rigid gender roles. These personal stories include but are not limited to topics like sexual harassment, women in military, sport, and political activism. With a following of over 44,000 people engaged in vibrant virtual conversations, the Faces of Takamol dispels the view that gender equity issues are irrelevant to Jordanians. The Gender Resource Manual includes stories extracted from this page which support the learning themes of each chapter. These stories have been catalysts for vibrant discussions during trainings, and often small details from these personal and relatable experiences open the hearts and minds of participants, who in turn reconsider the impact of rigid gender roles on the lives of individuals.

The manual also offers exercises adapted from the USAID Takamol Amend Your Proverb videos which use clever rhymes to rephrase popular proverbs that reinforce gender stereotypes so that they promote equity. For example, “Spoil your son and he will enrich you; spoil your daughter and she will disgrace you,” is a popular proverb that illustrates how parents treat sons and daughters differently due to the way shame and honor are shaped by gendered expectations. The amended proverbs states “Spoil your son and daughter… enrich them with your affection.” USAID Takamol shared the videos during trainings and found they resonate well in explaining concepts to youth and participants encountering the notion of gender for the first time.

Gender equality is recognizing that every individual enjoys equal human rights, regardless of gender identity. This message is sometimes compromised by the history of Western, colonial feminist movements whose principles and priorities were not developed on equal footing with feminists from colonized societies. These ideas often reflect Eurocentric, racist or prescriptive understandings of women empowerment. To effectively promote gender equity requires acknowledging that feminism has evolved over time, with different waves of feminist movements making way for more inclusive understanding of how to support women’s agency and equity. USAID Takamol found its efforts were most effective when imbued with concrete examples of local champions for women’s rights, centered within locally relevant movements for social justice. In Jordan, this meant inviting both secular and non-secular perspectives and introducing how women of faith have articulated gender equality principles within religious traditions and theology.

Based on this insight, the Gender Resource Manual includes a chapter that focuses on how Islamic feminists put forward gender-justice based interpretations of the Quran. The chapter also includes a story from Faces of Takamol about a man who worked with mosque preachers in his community to use Islamic anecdotes and religious scriptures to support women’s political participation. While careful to not put forward any particular understanding of Islam, USAID Takamol has shared different voices and feminist understandings based on Islam and encouraged participants to share their own views on the capability of gender equality and their personal values.