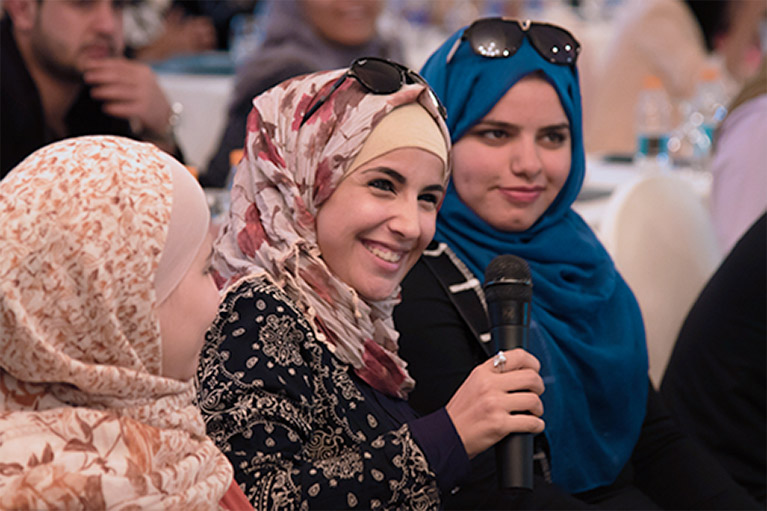 Youth are the largest segment of Jordanian society, but they often do not have a voice in the country's economic and political decisions. The USAID Takamol program equipped youth leaders with the necessary skills to become gender champions. Participants then strengthened existing organizations and founded new ones to work for change.

As the highly competitive job market pushes youth to the periphery of economic participation, Jordanian youth—particularly women—are facing high unemployment and a lack of alignment between education and job market needs. Similarly, low representation of youth and women on elected local councils makes it difficult for them to participate in the political process.

“The biggest issues facing youth and particularly women in Ajloun have been economic and political disenfranchisement,” observed Ahmad Rabab’a. Rabab’a is a member of USAID Takamol’s National Youth Leaders’ Network. The network guides a group of youth leaders to implement community initiatives across Jordan that engage women and youth in economic and political life.

For example, one of these organizations is Forset-ha. Established in 2016 by four network members, Forset-ha helps out-of-school girls continue their education and improve their job prospects through a training program that focuses on skills relevant to the labor market.

Altogether, the nine organizations recruited 460 volunteer activists, who created an extended network of gender champions across the kingdom.

Meanwhile, members of existing CBOs went on to implement initiatives using the knowledge they gained throughout the program. For example, Rabab’a and his colleagues began working to train and support youth and women so they could become more engaged locally and nationally in economic and political life.

With over 300 participants, Rabab’a and his colleagues conducted training sessions and workshops on several topics including gender awareness and expanding freedoms in the areas of democracy, freedom of expression, transparency, accountability, and justice. “We were able to change people’s perspectives,” Rabab’a said. “Five women ran for the local elections in Ajloun, and one of them won.”

Rabab’a’s initiative is currently focusing on the economic participation and development of their community: “We conducted several workshops with aspiring youth from our community on starting small and medium-size businesses. We also helped them secure funding, and a number of them have already started their businesses successfully.” Rabab’a is planning on setting up a job fair that will bring prominent companies from Amman to Ajloun to create more jobs in his community.

As other youth leaders continue to implement their initiatives and work toward engaging Jordanian youth in economic and political life, while simultaneously raising awareness of gender-related topics in their communities, USAID Takamol maintains its support for the National Youth Leaders’ Network members. The program conducts frequent meetings to discuss progress and offers mentoring and coaching to improve technical skills.

Funded by USAID and implemented by IREX, the USAID Takamol Jordan Gender Program is a five-year program focusing on mainstreaming gender at the policy, national, and community levels. The objectives of the program are to expand social dialogue on gender equality and strengthen enforcement and advocacy for female empowerment.