How citizens are embracing government decentralization to promote inclusion in Jordan

How citizens are embracing government decentralization to promote inclusion in Jordan

By
Alexa Brand and Emily Koppelman 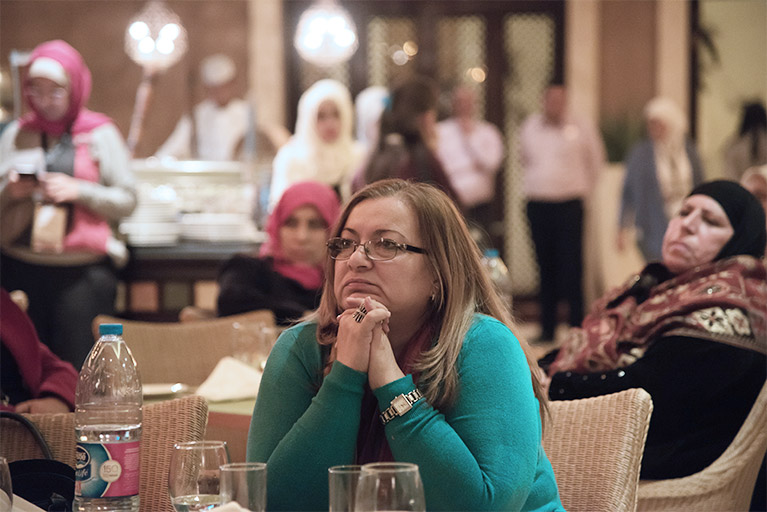 As Jordan decentralizes its government, new local and municipal elections offer tremendous opportunities for marginalized Jordanians to influence how they and their fellow community members are governed. During recent elections, 18 alumni of IREX’s USAID Takamol Gender Program won seats on their local and municipal councils, opening the door to create change in their communities.

By applying the skills and competencies that they acquired through various Takamol activities, both Fare’ Masaeed and Iman Al-Zoubi hope to leverage their newfound political power to promote sustainable, inclusive community development.

Prior to the elections, Iman Al-Zoubi had served as director of Irbid’s Zahr Ar-Romman Association for years. She became involved with Takamol through the program’s small grants initiative, Souk Takamol, which provides funding and technical expertise to support community-based organizations’ efforts to build gender considerations into all aspects of their work.

With support from Takamol, Al-Zoubi and her organization worked with local authorities to secure access to land and transform it into a safe, public place for underprivileged youth to play soccer for free. Before Al-Zoubi’s intervention, the prevalence of pay-to-play sports fields meant that children from low-income families were excluded from most recreational activities.

It shouldn’t matter, your gender. If you’re working to improve your community, you have every right to be a part of this process.

The organization built upon this success. It continued to collaborate with local government to launch a public sanitation project that focused on community-led efforts to clean Irbid’s streets.

Al-Zoubi won a seat on the municipal council of Al Yarmouk Municipality in Bani Kinana, Irbid. She maintains that Souk Takamol’s activities played a major role in helping her understand both the election process and the responsibilities of local and municipal council members.

“The experience I gained collaborating with the municipality [during the Souk Takamol soccer initiative] to communicate community needs to the government was particularly valuable,” she explained.

Al-Zoubi is convinced about the importance of connecting citizens to their local government, closing the gap between community members and decision-makers. She sees herself as a catalyst, explaining how her connection to the community has opened communication between the local government and its citizens. The once-empty halls of her town’s municipal building are now teeming with activity. People who had never before engaged in the decision-making process now regularly approach her and other council members to discuss community needs and challenges.

Al-Zuobi is proud to point out that seven of the 14 municipal council members are now women. “I’m happy to see women getting out of the house and doing something new,” she said. “It shouldn’t matter, your gender. If you’re working to improve your community, you have every right to be a part of this process.” After gaining experience in her current position, Al-Zoubi hopes to run in future decentralization elections.

Championing the rights of people with disabilities

After experiencing disability himself, Fare’ Masaeed saw firsthand the stigma that people with disabilities experience in Jordan. Many become isolated as a result of a culture of shame and a lack of resources and expertise in public institutions (particularly in the education system) to address the needs of Jordanians with disabilities.

Long before his accident, Masaeed was already involved in advocating for those living with disabilities—he started a community center that provides informal education for children with disabilities. The center also informs parents and families about disability issues, including options for treatment, rehabilitation, and social inclusion.

After his accident, Masaeed decided to cultivate his leadership skills and become a better advocate for his community.

After he was elected, Masaeed acted on the tools and knowledge he acquired through political workshops to create a committee of local representatives, all working to increase inclusion for people with disabilities. Masaeed has made it clear that he isn’t aiming for national recognition.

“I have no interest in running for Parliament,” he said. “I am solely interested in addressing the needs of my community.”

Funded by USAID and implemented by IREX, the USAID Takamol Jordan Gender Program is a five-year program focusing on mainstreaming gender at the policy, national, and community levels. The objectives of the program are to expand social dialogue on gender equality and strengthen enforcement and advocacy for female empowerment.