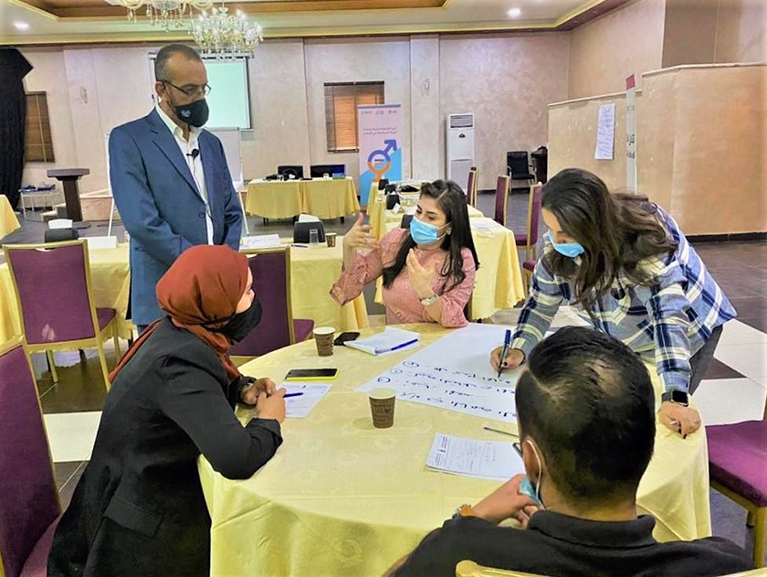 ​A lack of balanced representation of women in the media creates barriers for women in all forms of public life. In Jordan, IREX is helping journalists build skills in gender-sensitive reporting. Now Jordanian journalists are addressing stereotypes and challenging gender bias in local media coverage of women politicians.

In Jordan, politics is a male-dominated field and women politicians are treated unequally. Jordanian journalist Farah Al Abdullah has seen a subtle bias in the portrayal of women politicians in Jordanian media and noted how it discourages other women from pursuing careers in the public sphere.

“I noticed that the media has been treating women politicians unfairly,” she said, “either through the language they use to describe and report on them or through the selective coverage that only shines light on them in stereotypical ways.”

Al Abdullah came to realize the extent of the bias in media portrayals after enrolling in the Center for Defending Freedom of Journalists (CDFJ’s) Gender Bias within the Media training. The training was developed based on a study of the portrayal of female politicians in Jordanian media and the traditional stereotypes and social norms that influence their career paths and ambitions.

CDFJ partnered with the USAID Takamol program, implemented by IREX, to draw on IREX’s expertise in conducting gender-oriented research and addressing public perceptions of traditional gender roles. USAID Takamol, implemented May 2014 to April 2021, was dedicated to gender equality and women’s empowerment at the policy, national, and community levels in Jordan, and the program’s partnership with CDFJ in 2020 aimed to reduce gender-bias within media coverage of politicians as part of advancing women’s political leadership.

The program held training sessions in Amman, Irbid, and Aqaba for 38 journalists. The training included an introduction to gender concepts, how to identify gender biases during the reporting process, editorial policies that take gender into consideration, and a discussion on national legislation and international commitments that emphasize the importance of women’s political empowerment.

Al Abdullah noted that she and her colleagues reinforce traditional stereotypes by portraying women as weak and in constant need of “help” or “assistance” especially from men and that this was a pervasive issue. Many journalists unconsciously perpetuate this stereotype. Reflecting on her university experience, Al Abdullah realized that her education hadn’t focused on gender or equipped her with skills to report from a gender perspective. When journalists don’t receive this type of training, they can adopt unprofessional practices and produce gender-biased media products.

The sessions hosted by IREX and CDFJ inspired Al Abdullah to put her new skills in gender-sensitive reporting to use. After the training she focused her reporting on topics rarely covered by media, such as the with a lack of women in parliament with a political party affiliation, the fact that Jordan has never had a female prime minister, and an electoral law that hinders women’s political participation through a quota system that operates on a national level and not per district.

Being part of the change

For research on her stories, Al Abdullah reached out to previous female members of parliament and organizations that work on monitoring the election process. While many praised her for her interest in reporting on these issues, others advised against reporting on politically sensitive topics.

She chose to continue writing, and several high-profile female politicians shared her content and expressed their excitement that someone was finally tackling these topics.

“Regardless of how small my influence is, I’m happy to bring to light issues that other reporters fear writing about,” Al Abdullah said. “The first time that I realized how harmful gender bias within the media can be to the image of women in Jordan, particularly women politicians, I was encouraged to learn more so I can be part of the change.”

The USAID Takamol – Jordan Gender Program was implemented by IREX from May 2014 to April 2021 to support gender equity and female empowerment in Jordan. The program was made possible with the generous support of the American people.