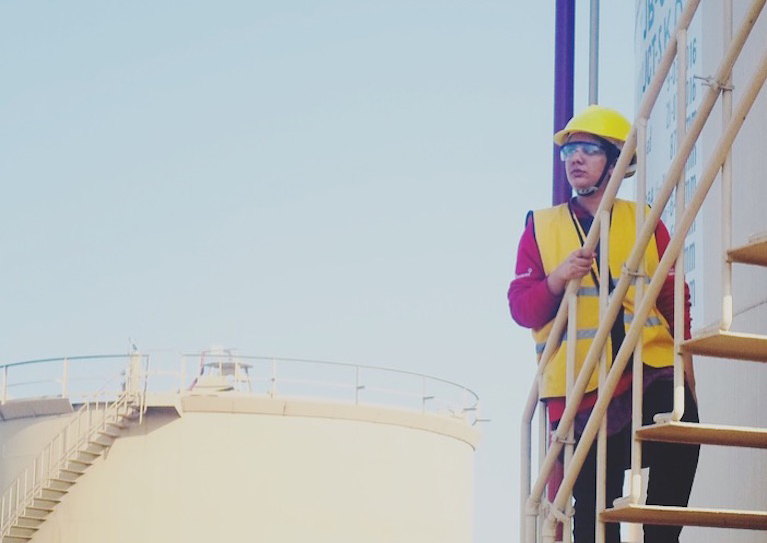 During her Global UGRAD-Pakistan experience in the United States, Malala immersed herself in women’s studies and entrepreneurship, leading her to create GirlTech, a startup focused on finding tech solutions to issues experienced by women.  Malala has continued to advocate for inclusion and diversity in male-dominated STEM fields, becoming the first ever female terminal manager at Shell Pakistan.

Malala is among the 91% of Global UGRAD-Pakistan alumni who report that the leadership skills they gained through the program helped them succeed in school (PDF, 5.7 MB). During her Global UGRAD-Pakistan semester at the University of North Dakota, women's studies and entrepreneurship courses inspired her to apply her tech skills to address problems women experience.

Malala gained confidence in herself as a leader during her Global UGRAD-Pakistan semester. She remembers a facilitator at orientation telling her to “take your comfort zone and throw it out the window,” and she has continued to reflect on this lesson during difficult times.

“Discomfort is not a bad thing,” she said. “Usually it means that I'm growing, that I'm being challenged and that I'm learning something about myself.”

After a friend was assaulted in a parking lot, Malala developed GirlTech's first app, StaySafe, to enable people to discreetly call for help in similar situations. After returning home, Malala donated GirlTech’s prototypes to a research university in Islamabad to incorporate them into their telehealth initiatives.

Her experience participating in student organizations in the United States also helped her envision the Women in Operations Network, a group she helped start within Shell Pakistan that raises awareness of the value of gender diversity. Women make up only a quarter of Pakistan's professional and technical workers, according to the World Economic Forum's 2021 Global Gender Gap Report (PDF, 13.6 MB).

Advocating for a more inclusive culture in the workplace

Malala’s Global UGRAD-Pakistan experience gave her an edge in the job market after she finished her undergraduate degree in electrical engineering. “I think my experience with UGRAD did set me apart from my peers in terms of getting international exposure,” she said.

She chose to accept a position at Shell because it gave her the opportunity to open doors for other women in the male-dominated oil and gas industry. “They said, ‘You’re going to be the first woman there and it's going to be hard, but you doing this will make it easier for others to follow,’” she recalled. “It was a challenge that would lead to change.”

Through Shell Pakistan, Malala traveled to Singapore for the company’s global diversity and inclusion conference to be trained as a diversity and inclusion facilitator. In this role, Malala leads conversations about diversity within the company and trains company leadership. Since she started at Shell, Malala has noticed an increase in women hires and changes in the workplace culture. Her colleagues are now more aware of diversity and more careful to avoid sexist attitudes. "They word their ideas to be more sensitive, to make us feel more included,” she said.

For Global UGRAD-Pakistan alumni like Malala, the exposure to diverse cultures, groups, and viewpoints is a key professional asset gained from the program. A 10-year impact evaluation of the program found that 80% of alumni report that the understanding of diversity and inclusion they gained as program participants has played a significant role in their career development.

“It was only a semester long, but it's something that has had a huge impact still so many years later,” she said of her Global UGRAD-Pakistan experience. “The journey doesn't end when you come home. It begins again.”