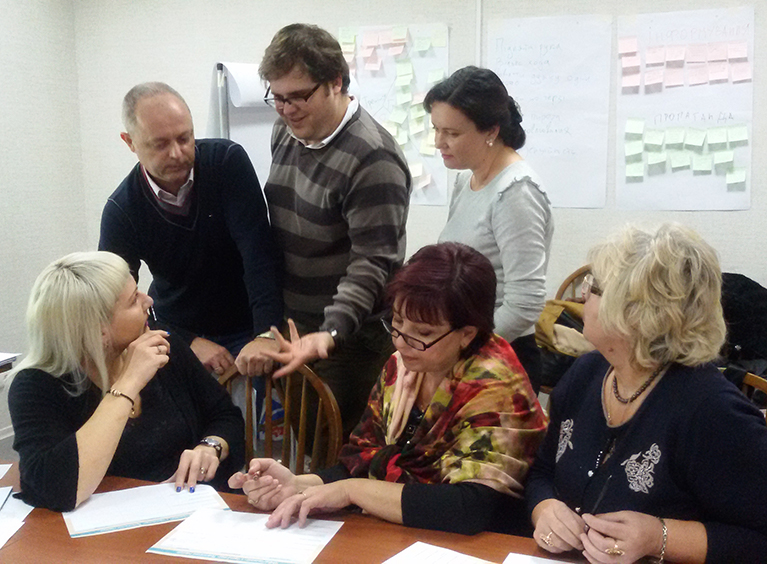 A new report by the Center for European Policy Analysis and the Legatum Institute highlights IREX’s innovative approach to helping citizens detect and decode misinformation in Ukraine.

The report synthesizes dozens of case studies to analyze Russian disinformation campaigns, which pose an increasing threat to the United States and European allies. The authors offer recommendations for strengthening media in democracies and educating media consumers.

IREX... has broken new ground in stepping outside the education system to promote media literacy.

“The concept of media literacy has long been seen as synonymous with education,” Edward Lucas and Peter Pomerantsev write in the report, “but what media literacy education means is changing: it is moving out of the classroom and into communities.”

In Ukraine, they continue, IREX has “broken new ground in stepping outside the education system to promote media literacy.”

(Update: A report by Paul Copeland for the Legatum Institute’s Beyond Propaganda series calls the curriculum “an impressive document largely developed from scratch by a team led by IREX Ukraine’s Director of Programmes.” Read more in the full report: Factual Entertainment: How to Make Media Literacy Popular.)

The report describes IREX’s implementation of the Citizen Media Literacy Project – Ukraine. This nine-month project taught 440 “trainers” in central and eastern Ukraine to evaluate the trustworthiness of media sources. Then trainers conducted their own training sessions and consultations with more than 15,000 citizens.

In contrast to traditional approaches, IREX’s “Learn to Discern” approach was designed to be both fun and practical for any audience, not just for those with a college degree. “We basically tried to get away from anything academic,” said Myahriban Karyagdyyeva, IREX’s director of programs in Ukraine. For example, trainers received videos, games, cards, stickers, and other props that made concepts more concrete and engaging.

Go to the full report or read more about IREX’s media literacy work in Eastern Europe.

Impact Study
Impact Study on Citizens’ Ability to Detect Disinformation 1.5 Years After Completing a News Media Literacy Program
Insight
Ukrainians’ self-defense against disinformation: What we learned from Learn to Discern
Case Study
Can Machine Learning Help Us Measure the Trustworthiness of News?