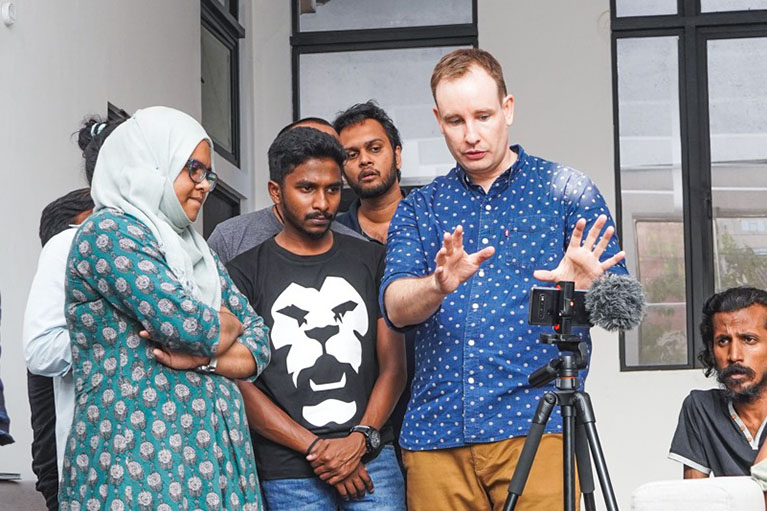 The media industry has changed irrevocably over the past several years, and outlets have struggled to keep up. In Sri Lanka, lockdowns during the pandemic prompted outlets to embrace new ideas. With support from the USAID-funded Media Empowerment for a Democratic Sri Lanka (MEND) program, Sri Lankan media organizations stabilized their revenue and grew their audiences by pivoting from print to digital.

When IREX began implementing MEND in 2017, the Sri Lankan media sector was static, devoting resources to things like installing printing presses. All of this changed when COVID-19 struck Sri Lanka in early 2020. The sudden and complete lockdown in March all but paralyzed print. Circulations plummeted, along with advertising. Some media outlets had to downsize, while others teetered on the edge of collapse.

Digital transformation was able to rejuvenate a nine-decade old legacy organization like ENCL through the [Media Development Partnership] program carried out by IREX.

MEND’s Media Development Partnership (MDP) program supported selected media outlets as they navigated this new digital terrain. While these outlets set their own priorities, they received tailor-made assistance from world-class mentors and trainers to reach their goals.

IREX had been working with ENCL, the largest Tamil-language newspaper organization in the country, since 2019. At the time, ENCL had just invested a large amount of money in a new printing press and moved outside of Colombo. A MEND mentor shared some fresh ideas with ENCL: by combining newsrooms, streamlining operations, and increasing video output, ENCL could increase its revenue stream. As ENCL adopted these innovations and began creating more videos—going from 90 videos at the start of the program to 410 per month by the end—ENCL’s digital audience skyrocketed.

Large outfits like Wijeya Newspapers, which has 18 publications in Sri Lanka, worked with MEND to revolutionize their editorial content and expand revenue sources as they introduced podcasts. A MEND international trainer worked with the Wijeya team to produce a podcast development deck that included research and analysis on the Sri Lankan podcasting landscape, as well as routes to monetization. Wijeya has since developed an entire podcast network of 24 original shows.

Lake House (ANCL), a government-owned media outlet, also joined MDP to streamline its New Media Unit. Through their work with an international trainer, ANCL developed a digital strategy for their three main brands (Daily News, Dinamina, and Thinakkaran), which subsequently improved the performance of the entire Lake House platform, with sites such as Dinamina rising in the Alexa ranking—a global metric for ranking countries’ website popularity—from 350 to 127.

Some smaller outlets also took full advantage of the opportunities that the program offered. Roar Media, a start-up, became one of the leading digital news providers in the country while working with the program. Roar piloted mobile journalism and launched a #FlattenTheCurve campaign, which encouraged audiences to take precautions during COVID-19.

EconomyNext, another new media publication, partnered with the program to increase its audience, redesign its website, and enhance its user experiences with improved navigation and loading speed. Since launching the redesigned website in April 2021, EconomyNext’s audience acquisition has increased by more than 73%.

Sri Lankan media outlets have credited MEND with supporting their transitions in a critical period. “Overall, the program helped us look beyond day-to-day operations and daily news cycles and ask those important questions about sustainability and long-term growth strategy,” said EconomyNext’s Deputy Editor Devan Daniel. Roar Cofounder and Chief Operating Officer Abdurrahman Haroon agreed: “We’ve been incredibly satisfied with the training received over the past year and beyond. Gaining access to international talent and domain experts has helped add new perspectives to our content and business, leading to growth for the company.”