Tamar Rukhadze is media technical assistance manager for the Media for Transparent and Accountable Governance (M-TAG) program, in Tbilisi, Georgia. She provides high-level leadership in implementation of activities aimed at building the capacity of Georgian regional media.

As a media technical assistance manager, she supervises the performance of M-TAG media partners, provides professional expertise in multimedia production and editorial management, conducts on-site training courses, and contributes to the overall implementation of the M-TAG program.

Tamar, who joined IREX in 2016, is an experienced journalist and media manager. She started in 1996 as a newspaper correspondent and has worked as a reporter and TV news producer for 20 years, being in charge of news programs at several Georgian TV companies. In addition, Tamar has experience managing a private TV studio and a nonprofit organization. For over two years she has worked as an executive director of Georgian Charter of Journalistic Ethics, which is the only independent self-regulatory body in Georgia. Tamar was invited to be a lecturer at two major universities in Georgia. From 2014 to 2016, she led courses on media ethics, self-regulation, and media management.

Tamar is fluent in English and Russian. She graduated from Tbilisi State University with a BA in journalism. 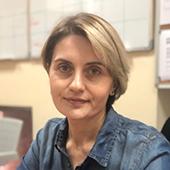