Sarah designed and implemented the Investing in African Journalism (IAJ) program, supporting tailored journalism workshops for journalists in 27 countries in Sub-Saharan Africa. A member of the Internet Freedom Festival team from 2015-2017, she helped the project evolve from a single event to a year-round collaboration with Internet Freedom communities around the world.

Previously at IREX, Sarah worked on the Ukraine Media Partnership Program (UMPP), Georgian Media Partnership Program, China by the Numbers Data Journalism Project and the Global Undergraduate Exchange Program in Pakistan. She has a Master's in international development studies from The George Washington University and served in the US Peace Corps in Mauritania, West Africa. She speaks Spanish and French. 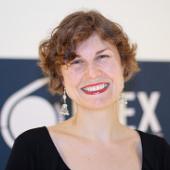