Cristina Grecu currently serves as the deputy chief of party for the Moldova Comunitatea Mea program, a $20.5 million, five-year, USAID-funded program that aims to strengthen local government in Moldova to become more effective, transparent, and accountable to citizens.

Cristina is experienced in the areas of democracy and governance, civil society, and enterprise development, having worked for USAID and National Endowment for Democracy–funded programs worldwide. She is certified as a nonprofit organization manager by the Institute for Organization Management, a professional development program of the U.S. Chamber of Commerce. She ensured both field office and home office–based management of large, complex USAID-funded programs in central and local governance, civil society, institutional development, public policy advocacy, and women enterprise development and is well versed in various organizational diagnostic tools.

Prior to joining IREX in June 2020, Cristina worked on the Economic Governance Program in Georgia, a USAID-funded $19 million project implemented by Deloitte Consulting. Before that, Cristina served as an associate/technical adviser and manager for the democracy and governance sector with Tetra Tech, where she coordinated technical and operational implementation of large-scale projects with USAID-funding, in addition to new business development in Moldova, Kosovo, Macedonia, Tunisia, and Afghanistan, among other countries. She was instrumental in securing the Promote contract (USAID’s flagship gender IDIQ) and served as the Promote IDIQ manager as well as the $41 million Women’s Leadership Development task order manager.

Before joining Tetra Tech, Cristina served as director of advocacy and programming for the Center for International Private Enterprise Program in Afghanistan and in Romania. Between 2005 and 2006, Cristina Grecu taught a seminar titled Advocacy Exercises in Influencing Public Policies as part of the master’s degree program on communication models and public relations with the Department of Social Communication and Public Relations at the University of Bucharest, Romania. Prior to that, she served under several local governance projects in Romania. 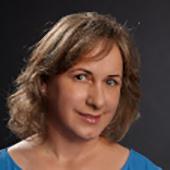