By
The SAFE Team 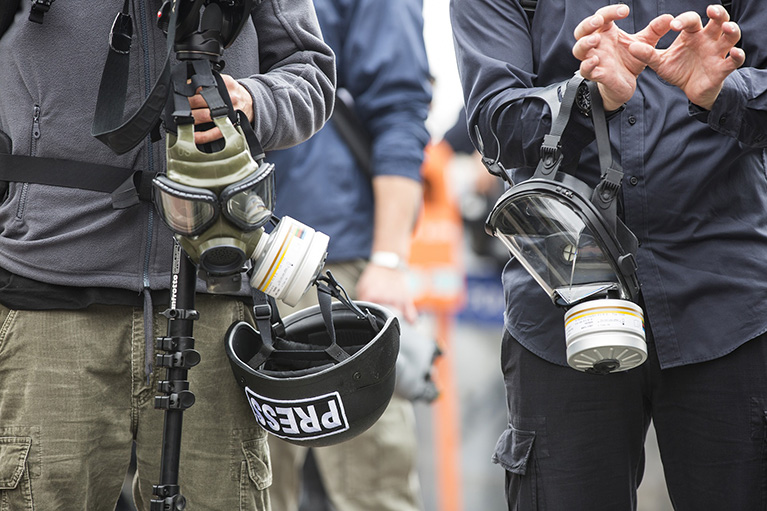 Media practitioners are at the forefront of the world’s tragedies, conflicts, and catastrophes. Covering and being exposed to such intense situations and emotions—sometimes on a daily basis—often takes a toll on journalists’ own psychosocial well-being. Since its inception, IREX’s Securing Access to Free Expression (SAFE) project has streamlined psychosocial safety in its work. Using a holistic approach to journalists’ safety in its trainings, SAFE provides participants with a tool set for psychosocial first aid and self-care.

Many journalists seem drawn to journalism’s challenges, which include an uncertain daily routine, chronic deadline pressure, powerful enemies, and constant anticipation for the next big story. But the aspects that make working in the media exciting in the first place can also be a journalist’s downfall.

Media outlets typically reward employees who go “the extra mile,” accept higher workloads, and put in longer hours. But having a chaotic schedule often makes it difficult to dedicate time to hobbies, family, and friends. This often leads journalists to slowly disconnect from their support network. At the same time, journalists typically cover issues that touch the very core of human nature and their own being—failure and success, war and peace, life and death. Dealing with these existential topics on a regular basis can be emotionally exhausting and outright traumatizing.

Meanwhile, conflict “hot spots” are no longer the only places where journalists encounter potentially graphic and traumatizing events and imagery. With the proliferation of eyewitness and citizen journalism, many journalists now find themselves on the digital front line. According to a recent survey by the Eyewitness Media Hub, more than 50% of journalists indicate that they are exposed to shocking and graphic source material multiple times a week, leading to a skyrocketing number of journalists with symptoms of secondary trauma.

In many countries, journalists are also in constant physical danger. An alarming number of state and nonstate actors fuel hatred against the press, and violence against journalists is on the rise worldwide.

Working in a fast-paced, often precarious, and occasionally dangerous environment can make stress, burnout, and even trauma become constant companions in a journalist’s life. “I think we all live this reality,” one participant concluded during one of SAFE’s holistic safety trainings. “It is necessary to work more on that.”

Journalists largely lack access to professional psychological help. They often either ignore their emotional and physical condition or self-medicate with alcohol and drugs.

Some journalists try to process their own emotions by producing a journalistic piece about the traumatic events they have observed. This can be a form of therapy, to an extent. Other journalists may try to suppress and dissociate themselves from their emotions. However, in the long run, both coping mechanisms tend to delay emotional exhaustion, stress, and trauma, rather than address it and prevent it from reaching unbearable levels.

Attitudes are slowly changing as stress levels and burnout increase

Rapidly changing attitudes toward mental health and well-being globally could eventually have lasting effects on the media community.

Workplace-related stress and burnout are on the rise. Recently, the extent of the current crisis led the World Health Organization to recognize burnout as an “occupational phenomenon.”

The global economy seems to also increasingly realize the detrimental effects stress and burnout can have on productivity and workplace retention. Leaving their staff’s psychosocial issues unaddressed not only harms the individuals themselves, but also “burns” talent and resources. Meanwhile, regional governments and intergovernmental organizations have also recognized the importance of mental health, and—at least on paper—committed to dedicating resources to this issue. To really have an effect, integrating self-care into the workplace is just one step that has to go along with a larger cultural shift in how society considers mental health and well-being.

In addition, medical advances in treatment methods are now more widely available than ever, making people more likely to get help and not dismiss their own mental health issues. While the stigma around mental health issues seems to be slowly declining, it remains one of the biggest obstacles to improving mental health and well-being globally.

The more that people go public with their own mental health stories, the easier it will be for others to seek professional help themselves. Although attitudes vary significantly across regions and cultures, there are signs that the discourse is slowly shifting. Seeking psychosocial help is increasingly perceived as a strength, not a weakness.

From the outset, the SAFE project dedicated key resources to streamlining psychosocial self-care in its holistic safety trainings. The team made it a central pillar of its training curriculum, alongside the “classic” training components covering journalists’ digital and physical safety.

As part of the trainings, SAFE develops and provides participants with a concrete set of tools for psychosocial first aid and self-care (see an overview [PDF, 205 KB]), while referring individuals who might need comprehensive medical or institutional support to a trusted partner network. Even though SAFE trainers dedicate specific sessions to this pillar of the curriculum, psychosocial elements are also integrated in lessons for both of the two other domains. This acknowledges the reality that digital, physical, and psychosocial safety are interrelated.

Meanwhile, SAFE staff strive to practice what they preach. After each training, SAFE teams typically dedicate time to a thorough psychosocial debrief. SAFE trainers—just like the journalists they interact with—can be exposed to secondary trauma and distress. Allocating time and space to destress and discuss their work within their teams is essential.

The project’s efforts are bearing fruit. Between April 2013 and June 2019, SAFE trained over 2,300 media practitioners and human rights defenders, more than two-thirds of whom reported after they received training that they are now much more likely to pay attention to how their work affects their emotions, thoughts, and behaviors.

“I will stop keeping all my feelings to myself until I feel like I am going to explode,” one participant promised herself, adding that she would dedicate time to psychosocial self-care “before it’s too late.”

Insight
How journalists can protect their mental health before, during, and after assignments
Guide
SAFE Basic Training Curriculum for Media Practitioners and Social Communicators
Insight
Ten tips for journalists’ safety when covering elections