By
Tara Susman-Peña and Katya Vogt 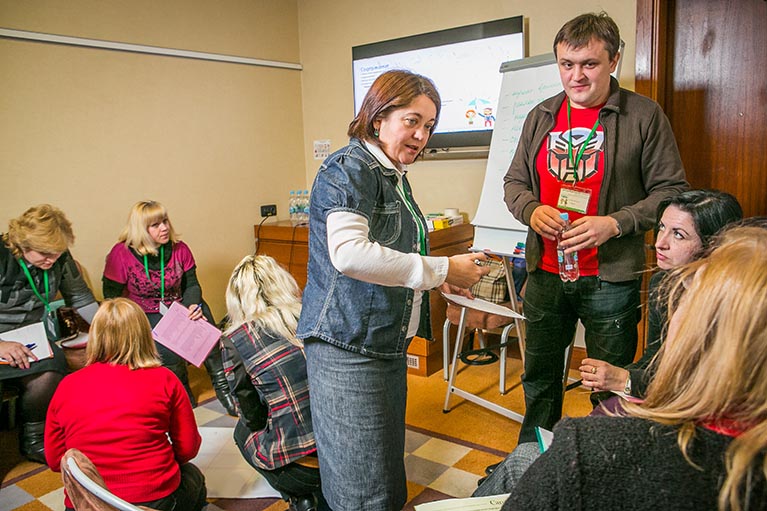 IREX recently conducted a pilot media literacy project in Ukraine called Learn to Discern. The goal was to equip Ukrainian citizens to both identify misinformation and demand better quality information. Results from the evaluation were extremely promising: people became more skillful in separating fact from fiction, and they shared what they learned with their family and friends.

A year after the program ended, we followed up with participants and learned more about why the program succeeded. There were several key ingredients that made the program so effective:

The human impact of disinformation in Ukraine

Since late 2013, a sharp increase in Kremlin disinformation and propaganda has threatened to upend democratic progress and political stability in Ukraine. The strategy of "hybrid warfare" deployed abundant, compelling messaging to stir up fear of being made second-class citizens amongst residents of Crimea to pave the way for illegal Russian annexation of the peninsula and the occupation of parts of Donetsk and Luhansk oblasts. Since then, Ukrainians live in a propaganda-filled environment where half-truths and “alternative facts” play on fears, confusion, national identities, and patriotic feelings.

These tactics have "[created] uncertainty, confusion, and ultimately a doubt whether any source can be trusted without personal experience." The disinformation problem is exacerbated by structural weaknesses in Ukraine’s media sector. Media ownership drives editorial policies, and major channels are owned by oligarchs and political elites with business ties in Russia. Thus, most broadcast media skews reporting to protect economic and political interests, and employs a manipulative framing of disputes as “patriotic” versus “objective” reporting. Citizens’ perceptions and opinions are shaped as they try to navigate a disorienting information deluge colored by influences from the Kremlin, Ukraine’s political parties, and oligarch-controlled media that drown out independent and objective voices.

Against this backdrop, Ukrainians remain poorly informed and confused about crucial governance reforms; many are becoming increasingly cynical and apathetic about the country’s future. While barely one in four Ukrainians trust the media, media consumption and its influence on Ukrainians remains high.  Yet even cross-checking news sources to verify them—the most basic form of media literacy—is not standard behavior, and about half of the population never cross-checks the news they consume.

The Ukrainian government has recognized the problem, but its mitigation attempts have focused on supply-side disciplinary measures: expelling dozens of Russian journalists and revoking the accreditation of over 100 media outlets between 2014 and 2015, banning Russian channels such as Dozhd’ from TV cable packages, as well as the most recent and controversial blocking of Russian social media and internet resources in May 2017.

Working with the demand-side to build resilience

In this context, IREX designed and implemented Learn to Discern (L2D) as the demand-side response to the problem of manipulative information. We believe that it is an essential companion to supply-side solutions such as alternative content production and support of independent, ethical, and truthful journalism. Citizens must be able to separate fact from fiction and recognize manipulation and hate speech, and they must demand and seek out independent, fact-based journalism.

From October 2015 through March 2016, IREX implemented L2D, a media and information literacy pilot, with funding from the Canadian government and in partnership with local organizations Academy of Ukrainian Press and StopFake. Through intense skill-building seminars, L2D reached more than 15,000 people of all ages and professional backgrounds. Remarkably, L2D also reached more than 90,000 people indirectly: direct participants shared what they learned with family, coworkers, and peers. Accompanying public service announcements and billboard messages alerting Ukrainian citizens to the danger of fake news reached an estimated 2.5 million people.

One year after L2D concluded, IREX conducted new research with the L2D staff and some trainers to see whether there had been any long-term effects. We learned that the project’s positive impact continues to grow, and we gained some insight into why L2D was so powerful. (Hint: it goes far deeper than fact-checking.)

Demand-driven momentum continues: During the program, IREX encouraged and empowered participants to share critical information consumption skills with others because sharing helps reinforce knowledge and because there was further demand. An exit survey of the L2D citizen trainers in 2016 found that at least 174 of them intended to pass on the skills even after the end of the project. What we found is that, in fact, trainers have continued to train others after L2D ended. As one of them observed, “People who ‘got infected’ with media literacy—kept going,” both with their own skill building and in sharing what they learned with those who heard about the project but were unable to participate due to timing and geographic limitations. A recent spot-check in Kharkiv revealed several examples of such initiatives:

In addition, IREX received reports from some librarians who were engaged as L2D trainers that they use the materials in their work “all the time” to educate their patrons. Several trainers also reported receiving small grants to continue using L2D materials and train more people.

L2D trainers continue on their own momentum

Even though it was a nine-month pilot, L2D had striking results that continue reverberating to this day. It was highlighted as a recommended “strategic response” to Russia’s information war in the recent report Defending and Ultimately Defeating Russia’s Disinformation Techniques published by the Center for European Policy Analysis and the Legatum Institute, noting that IREX “has broken new ground” with this approach to helping citizens detect and decode misinformation and disinformation in Ukraine. The approach was also mentioned as one of the effective responses to Kremlin influence in Ukraine in the recently published Kremlin Influence Index 2017. Today the L2D curriculum, materials, and a motivated network of trainers stand ready to help Ukraine reach a tipping point in how its citizens defend themselves and their country against disinformation and propaganda and contribute to local and regional stability and resilience.

L2D is a vital part of IREX's new approach for promoting vibrant information and media systems.