By
Sheila Scott and Phoebe Bierly 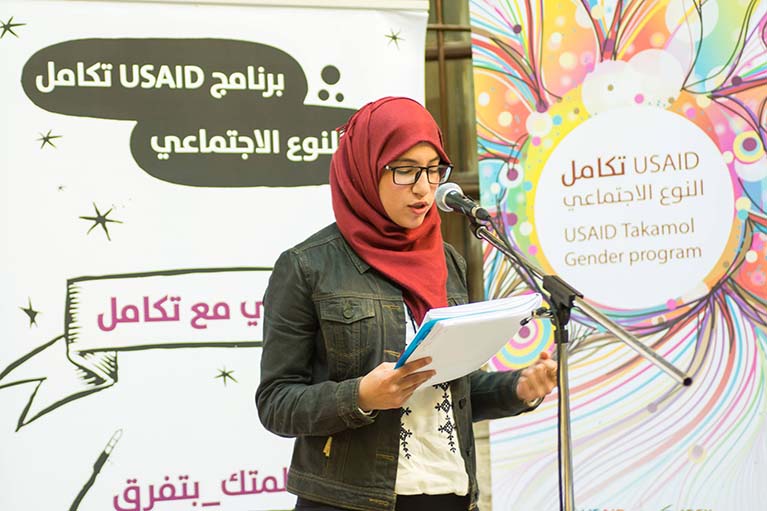 From 2014-2021, the USAID Takamol program partnered with over 104 governmental entities and supported 162 community-based and civil society organizations to contextualize, prioritize, and coordinate, national and local efforts toward advancing gender equity and promoting women’s empowerment in the Hashemite Kingdom of Jordan. Takamol used strategic online and offline campaigns to foster dialogue on gender, including supporting 79 community-based organizations to engage 38,600 people across all governorates. The learning brief synthesizes key insights from a virtual event convened by IREX in spring 2021 to reflect on lessons learned and best practices for advancing gender equity in Jordan.

The learning event brought together speakers from USAID and Takamol's government and civil society partners, including the Inter-Ministerial Committee on Women’s Empowerment, the Social Security Corporation, the Jordanian National Commission for Women, Dibeen Association for Environmental Development, and the Arab Women’s Legal Network, and over 75 participants from donors, implementing organizations, and civil society organizations engaged in work related to gender equity and women’s empowerment. The learning brief's insights are also grounded in USAID Takamol’s monitoring and evaluation data and internal reflection sessions conducted with IREX staff members involved in the implementation of Takamol.

1. A cyclical approach is necessary to transform gender inequities.

Normative change is not an on/off switch, but a gradual, nonlinear process during which people often hold contradictory beliefs and expectations for their own and others’ gender-related roles. USAID Takamol’s cyclical approach to working with key individuals and institutions involved careful expansion of activities targeted at early adopters to include work with their support networks, creating ever-widening circles of allies with shared values. Such an approach taps into the crucial role of normative reference groups, which research shows can be both positive (e.g., allies in addressing rigid gender roles within institutions) and negative (e.g., community influencers who block attempts to transform beliefs underlying gender inequities).

2. Consensus-building is critical for public-sector partners to transition to more equitable gender policies and practices.

From 2015 to 2019, USAID Takamol supported 11 government entities that conducted a participatory gender audit of their human resources and institutional policies and practices to identify and rectify gender-based disparities in internal work conditions. Many of the audits found human resource issues such as a gender pay gap and fewer women in senior leadership positions, which negatively affected the entity’s ability to develop and implement actionable gender-equity mandates and workflows. USAID Takamol was able to build consensus with the leadership to prioritize gender equity. Thus, they provided internal support for those efforts.

3. Partnerships with civil society organizations are key to supporting government efforts to address changes at a systemic level.

USAID Takamol and its partners benefited from Jordan’s women’s rights movement. Resistance to gender-equity efforts is extensive, and USAID Takamol often took its cues from local leaders to carefully calibrate support for gender-transformative approaches. For example, USAID Takamol supported the Jordanian National Commission for Women’s Legal Department to articulate ambitious legislative demands; among those that were adopted into law are an equal pay mandate with violation fines in the amended Labor Law No. 19/2019 and an amendment to Article 306 on sexual harassment in the Penal Law No. 27/2017.

Recognizing that there is still much work to be done, the learning brief outlines seven actionable recommendations for gender-equity champions in Jordan.