Nino Javakhishvili is a program and grants officer for the Georgian Media Partnership Program (GMPP) where she assists in facilitating partnership visits between Georgian and US media outlets.

Nino has a background in reporting and anchoring. She was a co-host of a weekly radio show, Weekly Review, and a columnist at an annual magazine. Throughout her career, Nino has collaborated with various international organizations such as GIZ, the United Nations World Health Organization, and the Eurasian Partnership Foundation. Prior to joining IREX, Nina worked for a British international NGO, Everychild, on an EU-funded project advocating for vulnerable children rights in the country.

Nino holds an MA in journalism and media management from the Georgian Institute of Public Affairs (GIPA) and a BA in international journalism from Ilia State University. She speaks Georgian and is fluent in English and Russian languages. 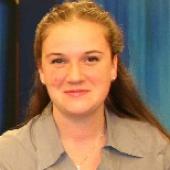