Promoting empathetic youth leadership in Pakistan: An interview with Raj

Promoting empathetic youth leadership in Pakistan: An interview with Raj 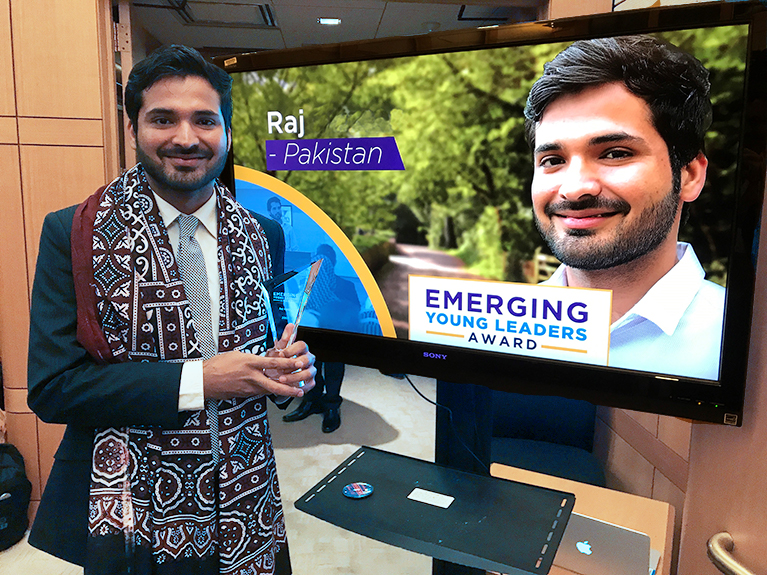 Raj, a determined peace advocate and alumnus of the Global Undergraduate Exchange Program in Pakistan (Global UGRAD–Pakistan), was one of 10 recipients of the 2017 US Department of State’s Emerging Young Leaders Award. He was chosen out of hundreds of applicants from around the world.

Raj received the award for his work in resolving cross-cultural conflicts in Pakistan. He served as a youth peace ambassador at international events and brought together diverse community groups to promote messages of peace through the arts.

Raj credits his success to the leadership skills he developed during the Global UGRAD–Pakistan program. These skills included cultivating empathy and bolstering cultural bridges between Pakistan’s disparate ethnic and religious groups. He spoke with IREX about his experiences in the program and the advice he has for future young leaders in Pakistan who are working on community issues.

EH: Tell me about your work as a young leader in Pakistan.

Raj: I come from a very small town in Pakistan, and I did my undergraduate degree in business in Islamabad. After returning to Pakistan from the Global UGRAD–Pakistan program, I became the youth director for the Pakistan–US Alumni Network, through which I worked with other US exchange alumni on important issues that affect Pakistan, including ethnic and religious differences within communities.

Raj, an alumnus of the Global UGRAD–Pakistan program

Shortly after, I went to Chandigarh, India, to represent Pakistan for the Global Youth Peace Festival. The festival fostered talks between people from different cultures and allowed them to build empathy toward one another. This was a vital step toward my leadership development.

[After returning to] Pakistan, I started writing articles for newspapers. An article I wrote called "My Journey As a Pakistani Hindu" was published by many news agencies in Pakistan. I believe that it was well received because [I] gave a firsthand account of my experience as a minority in Pakistan, something that is rarely spoken about in daily conversation. This story opened doors [for me] on several Pakistani talk shows to speak about peace promotion across the country.

EH: How did your experiences on the Global UGRAD–Pakistan program shape you in becoming a successful youth leader in Pakistan?

Raj: The Global UGRAD–Pakistan program steered me down the road I am currently on. When I got to Juniata College in Huntingdon, Pennsylvania, I realized that I needed to go down a different path, to do something bigger than myself. I felt like I needed to give back to the community.

This was fostered through the community service component of the Global UGRAD–Pakistan [program]. I was inspired by the sense of ownership Americans have for their communities and [how] they take responsibility and time out of their busy lives for the betterment of communities.

EH: What experience from your time in the Global UGRAD–Pakistan program stands out as the defining moment that transformed you into the leader you are today?

Raj: There was a small student group at Juniata College called The Global Village. When I joined this group, I met people from other countries and regions. I learned that we need to come forward and meet other people who are different from ourselves. Joining The Global Village shaped me. This is how the Global UGRAD–Pakistan program has shaped my mentality into a global-centric thinker. This is something that I am going to carry forward throughout my entire life.

EH: How did Global Village make you more empathetic toward other cultures?

Raj: The Global Village helped me to eliminate the negative stereotypes I had about certain ethnicities and cultures. For example, before joining the Global Village I had very little room in my head for respecting differences of opinion. After a short time of getting involved with the Global Village, some of my best friends were from other countries with different viewpoints than my own. We used to have long, open discussions on topics without disrespecting each other’s opinions.

EH: How has your definition of leadership changed since participating in the Global UGRAD–Pakistan program?

Raj: Before participating in the Global UGRAD–Pakistan program, I only led small groups. Now, I feel like it is my duty to represent all of Pakistan.

During the Emerging Young Leaders Program in Austin, Texas, I was asked about my future goals and aspirations. I told everyone that although I am a minority Hindu in Pakistan, I want to give a message to the world that Islam is a peaceful religion. People were shocked to hear that I wanted to do something directly with a different religion, but I know that what is portrayed in the media is not the true Islam.

EH: What advice do you have for young people in Pakistan who want to become leaders in their own communities?

Raj: I would say to all future youth leaders: Have a sense of ownership. People need to come forward and start giving back to their communities rather than questioning what their community is giving them. Moreover, it also means taking responsibility—start making a difference through the spirit of community service. Once you start owning your community, your country, and then the world, I think you can be a leader. If you have a sense of ownership in you, you can be a leader.