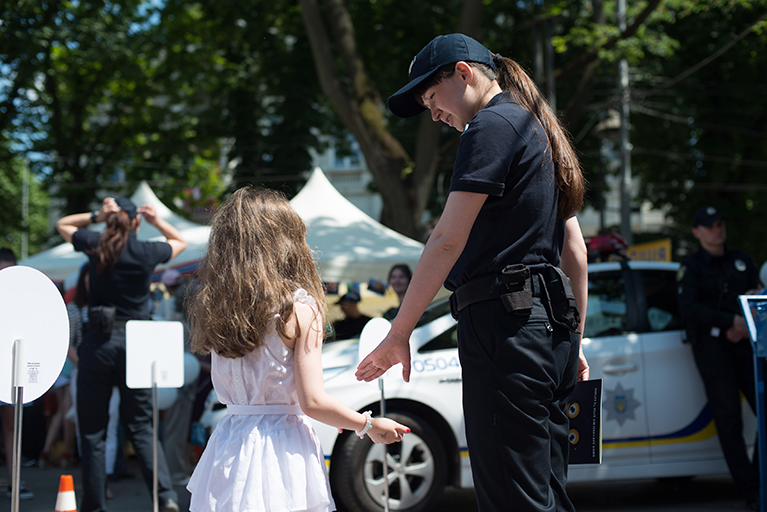 Until recently, many Ukrainians have been reluctant to talk about violence against women. As more women and men speak out against sexual and gender-based violence in Ukraine, here are four things that we can do to help.

In July 2016, a young Ukrainian activist named Nastya Melnychenko broke a long-standing taboo by talking about sexual assault and harassment. She publicly shared her intensely personal and challenging story of experiencing sexual harassment and violence.

Melnychenko encouraged others to raise their voices, too. She used the hashtag “#IAmNotAfraidToSpeak” (#янебоюсясказати) and started a conversation about sexual and gender-based violence (SGBV) in Ukraine. Since then, hundreds of women and men have joined this online movement and shared their experiences of sexual assault.

This comes at an important time in Ukraine, as SGBV almost always increases during times of conflict or war. Between January and October 2016, a Ukrainian national hotline for preventing domestic violence, human trafficking, and gender discrimination received 28,680 calls, three times more than last year.

Unfortunately, a significant number of domestic and sexual violence cases in Ukraine are associated with dismissed riot police, returned soldiers, or displaced persons who either cannot find a new source of income or struggle with adjusting to new challenges. In addition, more than 1.7 million people—the majority of whom are women and children from eastern Ukraine and Crimea—have been displaced into other parts of Ukraine. This means that more people are more vulnerable to sexual harassment, domestic violence, and rape.

Ukrainian civil society groups, media organizations, and government authorities recognize that SGBV is an issue for many Ukrainians. As international experience demonstrates, law enforcement agencies can guard against abuse by responding to, detecting, and preventing SGBV.

In order for police officers to be successful, they need broad support from the public and the Ukrainian government. The following steps have been taken so far, but they must continue. In the long term, the GBV situation in Ukraine will only improve by making steady progress in small and large ways.

1. Build trust between citizens and the police

Trust is the cornerstone of successful policing efforts, safe communities, and cooperation between police officers and local community members. Since October 2015, IREX’s Citizen Engagement and Reform Communication project has been building trust and establishing productive relations between police and those they serve through community engagement events. Project data collected immediately before and immediately following events conducted within the framework of CERC indicated that positive attitudes toward police grew from 40% to 73% among respondents.

In Ukraine, IREX has also raised awareness about domestic violence. In cooperation with the National Police of Ukraine and Ministry of Internal Affairs, IREX launched an information campaign that included public service announcements and posters on domestic violence. The campaign is helping to change attitudes about domestic violence while educating people about how to seek help. A 30-second video clip was aired on seven TV channels in Ukraine for three months. The overall public information campaign reached at least 1.5 million residents in six cities between June and September 2016. Citizens who saw the campaign expressed a more positive attitude toward law enforcement.

As Christina Asquith recently argued in the Atlantic, “The best way to reduce rates of violence against women, sexual assault, rape, and homicide is to hire more women officers.” 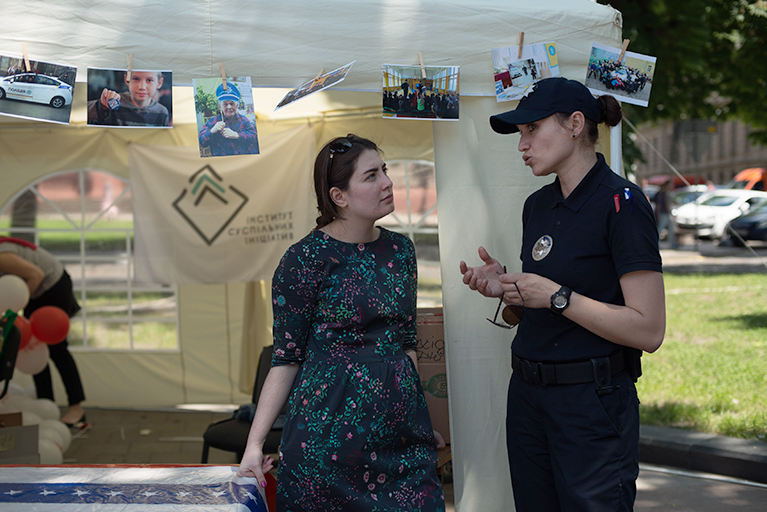 In Ukraine, the number of women officers who are now serving on the national police force has dramatically increased. Nearly a quarter of all patrol police officers in Ukraine are female. For Ukrainian society, this is a real breakthrough, given that women were only eligible for 5% of seats in Ukraine’s Police Academy until about 1999.

This suggests that women who are subjected to SGBV and domestic violence in Ukraine are more comfortable calling for assistance when they know that a female officer will respond, a finding that aligns with prior research about women and policing. Further, women officers tend to take reports of violence against women more seriously and are more likely to investigate such crimes.

It is clear that a balanced representation of female and male officers can help improve police services regarding SGBV. Thus, recruiting and training more women should be a priority for the national police and Ukraine’s Police Academy.

According to the Organization for Security and Cooperation in Europe, about half of the calls to the police in Kyiv come from women who have been subjected to domestic violence. When police officers respond to SGBV calls, they are well aware that such cases can be dangerous for both them and the victim. In order to gain trust, the police must understand the survivor’s experience.

Given the urgency of the problem, OSCE trained 11,800 patrol officers on how to respond to crimes of domestic violence in 2015. These trainings provide critical skills that allow officers to respond to SGBV cases.

SGBV crimes are different from other crimes and need special attention. Although, OSCE training on domestic violence is an ongoing initiative that supports the capacity of Ukraine’s national police, it should be adopted nationwide and enforced for each member of the police force.

Although Ukraine launched its first National Action Plan for implementation of UNSCR 1325 in February 2016, the conflict in Ukraine continues to put women and other vulnerable groups at risk. On November 12, 2016, the president of Ukraine introduced a bill to parliament to prevent violence against women and domestic violence. If ratified and adopted, the bill would be a good step toward reducing gender-based violence. Media, local NGOs, and key influencers can raise awareness and try to influence the parliament of Ukraine so that the legislation is indeed passed.

Addressing SGBV issues requires long-term, coordinated effort from the national government, law enforcement agencies, civil society, international NGOs, private individuals, and others. Ukraine is moving in the right direction, but there is a still long way to go. Building trust between citizens and the police, recruiting more female police officers, training police on how to respond to domestic violence, and passing legislation that will meet international standards can contribute to a decrease in SGBV cases in Ukraine.

Citizen Engagement and Reform Communication is a project of the US Department of State’s Bureau of International Narcotics and Law Enforcement Affairs and is implemented by IREX, in partnership with the International Development Law Organization.