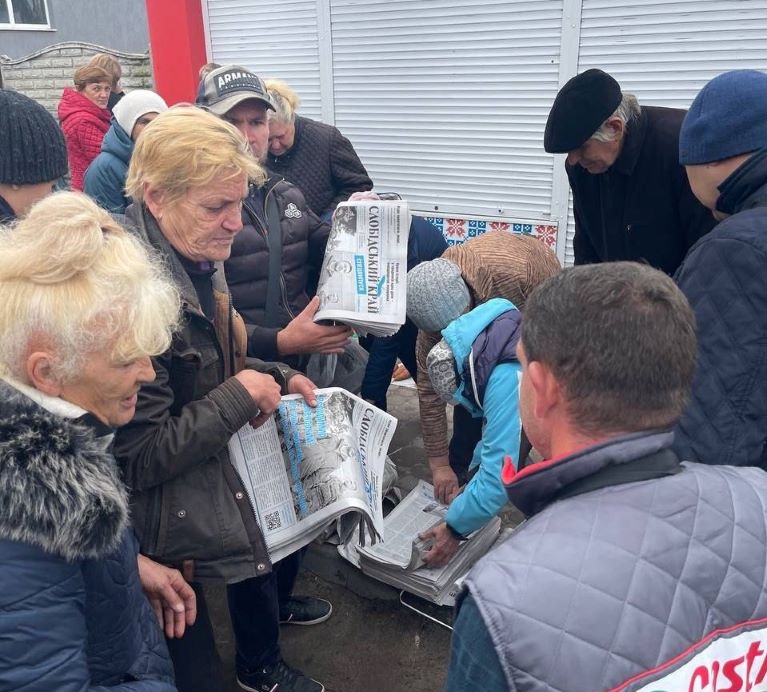 When Russia started its full-scale invasion of Ukraine in February 2022, hundreds of thousands of Ukrainian civilians were trapped behind enemy lines in Kharkiv oblast (region), without basic amenities and restricted access to information. Now that Ukraine has liberated more than 400 cities and villages in most of Kharkiv oblast, the civilians need to be educated about their rights and need accurate information about what is happening with the war. The Ukraine Rapid Response Fund (URRF) project partnered with the Ministry of Culture and Information Policy of Ukraine and the local newspaper, Slobidskyi Krai, which has been operational in Kharkiv region since 1917, to provide information to civilians in de-occupied Kharkiv.

The Ukraine Rapid Response Fund (URRF) was created in March 2022 as a result of Russia’s invasion of Ukraine on February 24, 2022. The goal of the URRF is to address the immediate needs of Ukrainians and assist the Ukrainian government in its efforts to support its citizens quickly and effectively.

After the invasion, civilians had no access to the internet or phone services; they could only depend on inherently unreliable information from the Russian occupiers for any news. “The occupiers understood the importance of the informational component. The first thing they did in the occupied regions – cut people off from any information," said Oleg Synegubov, Governor of Kharkiv Oblast Military Administration.

The occupiers ruined the infrastructure for mobile, internet, and mass media, and implemented curfews to prevent residents from communicating with each other. Consequently, people could not tell each other the truth and the occupiers could effectively spread misleading propaganda.

Two weeks after the de-occupation, the Slobidskyi Krai editorial team rapidly developed and printed its first special issue for citizens bringing them up to date on the state of the war and changes in legislation regarding their rights as citizens. Specific requests for information from citizens empowered the editorial team to prepare and assemble a selection of articles within a short period of time. The Ministry "first and foremost decided to print newspapers, as the majority of locations [across Kharkiv oblast] were cut off from electricity supplies,” said Hanna Krasnostup, Acting Director of the Directorate for Information Policy and Information Security of the Ministry of Culture and Information Policy of Ukraine.

The Ukraine Rapid Response Fund worked with a local print shop in Kharkiv that is still functional, despite the constant shelling, to print 20,000 copies of the first informative paper. The Kharkiv Oblast Military Administration oversaw the distribution of the newspaper throughout de-occupied Kharkiv. According to the Governor of Kharkiv OMA, the printed word did more than just help end the information blackout faced by hundreds of thousands of Ukrainians, it “informed people that they are not alone, they are not forgotten; they are being taken care of... to bring de-occupied communities back to normal life.”

The newspaper also covered important topics such as the Ukrainian government's efforts in restoring the liberated territories, land demining, restoration of electricity, gas supply, and health care systems. It also reported the successes of the Ukraine’s Armed Forces counteroffensive; the government's response to the illegal annexation of the territories; and the support of the international community. The paper documented the horrors of Russian occupation in Kharkiv oblast (mass graves, torture chambers, shooting at civilian cars), helpful winterization tips, and the stories of the occupation survivors. The first issue of the newspaper was in such a high demand that it was distributed to citizens within minutes of its arrival to the distribution site such as local markets, public squares, town halls, village centers, and other public gathering places. The URRF along with the local partners realized the importance of quality content and has already supported the release of three additional special issues of Slobidskyi Krai newspaper, bringing the total number of printed copies to 80,000.

“We understand that people who have been deprived of any information for months need to adapt to the new circumstances – the renewal of life in Ukrainian reality," said Larysa Hnatchenko, Slobidskyi Krai's Director of Media. Through the URRF’s activities, IREX plans to continue to address the needs of Ukrainians and assist the Ukrainian government’s efforts to support its citizens and institutions now and as they emerge from the war quickly and effectively.