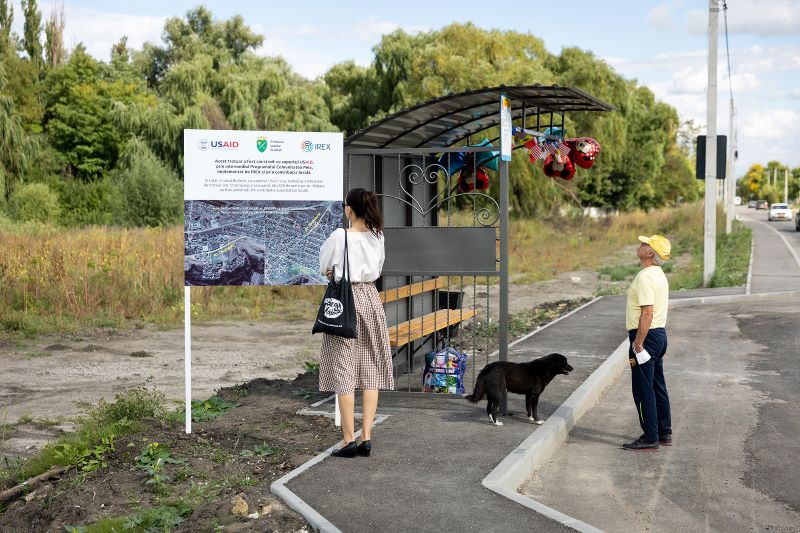 Citizens in Budești village Moldova, identified traffic safety as a major problem for the community. USAID’s Comunitatea Mea (My Community) project worked with the local public authority to design and co-fund a project that would rehabilitate sidewalks through a critical portion of the town, not only creating safer conditions for pedestrians, but also reinforcing the relationship between the local government and the community and building institutional capacity to complete more development projects in the future.

The sidewalks in Budesti built several decades ago, only covered a fraction of the roadways in the village, and have not been repaired since their construction. Over time the original sidewalks had deteriorated, and citizens were forced to walk in the road alongside moving vehicles to reach key places in town, creating a safety hazard. During the Comunitatea Mea-assisted strategic planning process, the community had identified sidewalk repair as a major priority to improve safety, especially for children and new mothers.

On September 21, 2021, members of the Comunitatea Mea program, representatives from USAID Moldova and the village leadership from Budești came together to celebrate Hram, or “Village Day”. The event marked the inauguration of a community development project rehabilitating 2,070 meters of sidewalk to provide safer walking conditions for pedestrians, and connect the town.

At the event, Daniel Șerban, Director of the Comunitatea Mea Program remarked that "this project is the result of a true partnership between the City Hall and the U.S.  Agency for International Development (USAID), who have invested dollars into projects that support active citizens who care about the future of the community.”

Connecting Citizens to the Village and the Government

"Safe sidewalks are absolutely necessary for pedestrian safety, including the elderly, mothers with prams and people with special needs. We are happy to inaugurate these sidewalks at the beginning of the school year, thus, children will be able to get to school safely,” said Victoria Gelis, Director of the Democracy and Local Government Department of the USAID Mission to Moldova.

Beyond the physical benefits of the rehabilitated sidewalks, the Budești project also improves relations between the local government and its citizens by demonstrating the government’s ability to respond effectively to citizen’s needs. Comunitatea Mea supports local public authorities to develop strategic action plans with citizen input and then assists with solutions to issues raised during that process. This helps the local government demonstrate its ability to listen and directly respond to the needs of the community. As Mrs. Nina Costiuc, mayor of Budești, explained, “People tell us what they want, and local authorities do everything possible to find financial resources to improve local infrastructure and services and thus the lives of citizens in the locality.”

Additionally, the Budești project increased the involvement of citizens in local community improvements. The idea to rehabilitate the sidewalks was selected by convening initiative groups of diverse citizens who identified road safety as a priority issue for the community. Furthermore, Comunitatea Mea organized and trained a community oversight group to monitor project progress and ensure clear communication between the mayor’s office and citizens.

The Hram celebration also marked the signing of a new Inter-Municipal Cooperation agreement with Comunitatea Mea. Budesti, along with its partner communities Tohatin, Cruzesti, and Colonita, currently has issues with its waste disposal systems due to a lack of proper equipment to transport solid waste and landfills that are too close to residential areas. The new agreement finances an expansion of solid waste management capabilities, including purchasing new equipment for handling solid waste, removing existing unauthorized landfills, and distributing garbage bins for household waste collection.

Working with Comunitatea Mea, the local government and citizens of Budești have improved the quality of life in the village and initiated plans to build upon those improvements in the future. The development projects help keep citizens safer, involve citizens in local government affairs, and increase local authorities’ ability to respond to identified needs in the community.

Comunitatea Mea is a five-year program funded by the United States Agency for International Development (USAID) and implemented by IREX, in partnership with TetraTech and Urban Institute. The program’s purpose is to improve the capacity of local public authorities (LPAs), including their ability to work inclusively with citizens and civil society, to increase revenues, improve financial management practices, build stronger checks and balances between the central and local governments, and facilitate public-private partnerships and intermunicipal cooperation.

Disclaimer: This post is made possible by the generous support of the American people through the United States Agency for International Development (USAID). The contents of this post are the sole responsibility of IREX and do not necessarily reflect the views of USAID or the United States Government.