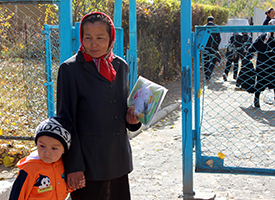 This report describes the BOTA Foundation’s programs, achievements, and impact after five-and-a-half years of operation in Kazakhstan. The BOTA Foundation was founded in 2008 by five Kazakhstanis and the governments of Kazakhstan, the United States, and Switzerland as a means of returning more than $115 million in disputed assets in support of poor children, youth, and their families in Kazakhstan.

The Foundation’s mission was to improve the lives of vulnerable children and youth suffering from poverty in Kazakhstan through investment in their health, education, and social welfare.

The World Bank contracted IREX to build the Foundation, oversee its operations, and support the administration of its programs to ensure that BOTA reached its stated goals and that the funds were used for their intended purpose. Save the Children provided technical assistance to three of the Foundation’s departments. A predominantly Kazakhstani Board of Trustees (BoT) served as the governing body of the BOTA Foundation, the World Bank provided supervisory support, and the three government parties had ultimate authority on how the funds were used.