Michael is director of the Information and Media Practice at IREX. He has more than 15 years of experience in international development. Michael manages a portfolio of programs in Africa, the Middle East and North Africa, Asia, Europe and Eurasia, and Central America.

Prior to joining IREX, Michael administered a number of media projects for private consulting corporations and was actively involved in new business development in Washington, DC.

Michael started his career as a journalist at the BBC and Radio Free Europe. He is the recipient of the Golden Microphone Award for a program produced on the BBC about war reporting.

Michael holds a master's degree from Georgetown University and an undergraduate degree from MSU's journalism program. He teaches a course on digital disruption and journalism safety at the University of Maryland’s Merrill College of Journalism. 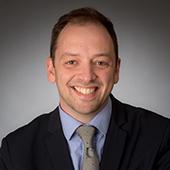