Aleksander Dardeli is executive vice president at IREX. He is responsible for ensuring that IREX effectively navigates market and geopolitical trends and successfully seizes business opportunities. He is also responsible for creating long-term value for IREX through innovation and partnerships, maximizing impact through learning, and communicating effectively the impact of IREX’s work to beneficiaries and strategic stakeholders.

Aleksander has held executive and senior management positions with nongovernmental organizations, intergovernmental organizations, and private-sector organizations. He has led and advised governments and private-sector clients on major good governance, justice, institutional reform, and media development initiatives in emerging economies and postconflict environments. He has cultivated major initiatives and opportunities with the United States Department of State, the United States Agency for International Development, the European Union Commission, the United Nations, and major corporations, including winning and managing global indefinite quantity/indefinite delivery contracts.

Before focusing on strategy and development, Aleksander served as vice president of the Democracy, Governance, and Media Division of IREX and oversaw the IREX Center for Collaborative Technology, a portfolio of major activities and initiatives in 30 countries. Prior to that, he was executive vice president of IBI International, a private company that specializes in governance and public administration reform.

His 20 years of experience include serving as practice director of DynCorp International/Casals’s Global Democracy and Governance Practice, director of legal programs of the East-West Management Institute, and head of project development for the International Development Law Organization, an intergovernmental organization based in Rome, Italy. He has published opinion pieces and commentary on promoting good governance, fighting corruption, strengthening media to produce content that matters, and making foreign aid more effective, and has been interviewed by media outlets including BBC and Voice of America. 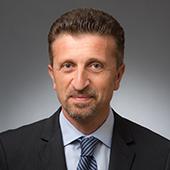