The program focuses on developing independent, self-sustaining media in the regions of Ukraine with the help of international expertise, knowledge, and skills. Under Svitlana’s management, UMPP alumni continue to interact and foster long-term beneficial relations.

Svitlana joined IREX in 2008 as a project assistant for the Internet Access and Training Program (IATP) and in 2009 occupied the position of UMPP program coordinator. Previously, Svitlana coordinated fundraising activities at an international charity and worked on various projects financed by the U.S. Government and European Union.

Svitlana received an MA in foreign languages from Precarpathian University in Ivano-Frankivsk (Western Ukraine). As an undergraduate, she started her work experience interpreting for a British-Ukrainian joint venture. 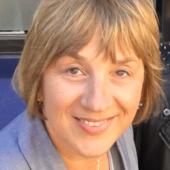