Siatta Scott-Johnson is a journalist working with the Female Journalist Association of Liberia, where she leads trainings and workshops on how to address gender issues using media platforms. While in the U.S., Scott-Johnson worked with Beyondmedia Education in Chicago, Illinois, assisting the organization in its efforts to provide media arts education to populations traditionally underrepresented in the mass media. Upon returning to Liberia, Scott-Johnson worked on building the media literacy of Liberian youth—focusing specifically on young women—with the goal of increasing youth voices in the media and fostering greater youth civic participation in society. 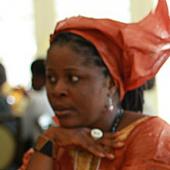