Sbonelo Mkhize has been involved in community development for over five  years. Having traded his three piece suits from his investment banking days to lead a community in the Province of KwaZulu-Natal, South Africa, Chief Mkhize, as he is known to his community, has placed emphasis on development in all aspects for his 23,000 strong clan. The AbaMbo Traditional Authority, headed by Chief Mkhize and situated in the foothills of the Drakensberg Mountains, is an impoverished community whose inhabitants mostly survive on social grants and primary agricultural vocations.  Sbonelo's main responsibilities are to provide guidance in disputes between people, give advice on what development issues should take priority, and to draw up plans on how to unlock economic value on close to 10,000 hectares of land on which he has jurisdiction. His ultimate goal, when he returns from the U.S., is to draw up creative plans in order to attract investment, foreign and local, into rural areas for the benefit of 296 Chiefs within the Province of KwaZulu-Natal.  Currently reading for a Master of Commerce in Local Economic Development at the University of KwaZulu-Natal, he hopes to utilize that technical knowledge to further assist in the development of his clan. 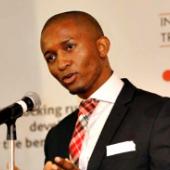