Sara Al-Utaibi is the chief of party for the USAID Takamol program in Jordan.

Sara collaborated with the team to spearhead the change in the program’s strategic approach after it was granted a two-year extension. Her emphasis on sustainability and institutionalization of gender mainstreaming in the public sector has translated into tangible efforts with various governmental counterparts, including ministries and national institutions.

Sara is a lawyer with over 20 years’ experience for a variety of organizations, including USAID-funded programs and UNHCR. She served as the assistant to Her Majesty Queen Rania Al Abdullah’s advisor on childhood and public health. Most recently she managed multimillion-dollar programs in the fields of legal reform, electoral assistance, democracy, governance, gender, inclusion, and youth, funded by USAID through cooperative agreements and contract mechanisms. 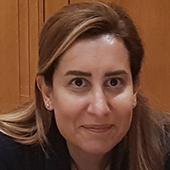