Ligia Blanco is the deputy chief of party for the Proyecto Acción Transformadora in Guatemala.

Prior to joining IREX, Ligia served as the director and legal representative of the office in Guatemala for the Dutch Institute for Multiparty Democracy (NIMD), an organization that works to strengthen the political system and training processes of new political actors. Ligia has worked as a professor at the Universidad Rafael Landivar in Guatemala, and as a consultant in the “National Human Development Report” and "Program for Strengthening Democracy of the Political System" of the United Nations Development Program (UNDP). She also consulted for research projects in the Latin American Social Sciences Institute (FLACSO) and the Association for Research and Social Studies (ASIES) on various topics including democracy, peace, political parties and electoral systems within Guatemala and the region. Furthermore, she was the deputy executive secretary and director of the “More Women Better Politics” initiative.

Ligia holds an MA in political science with a major in parliament and institutional relations from Pantheon-Assas Paris II University in France. She also holds a postgraduate degree in gender studies from the Latin American Social Sciences Institute (FLACSO) in Guatemala. She obtained her BA in political science at Rafael Landívar University in Guatemala. 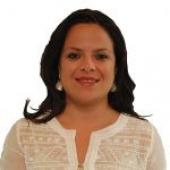