Lia is Chief of Party for the USAID-funded M-TAG program, which aims to improve the public’s access to independent, reliable, and balanced information relevant to Georgia’s good governance.

Lia was the Deputy Chief of Party for the USAID-funded G-MEDIA program from October 2010 through September 2014, which aimed to improve the public’s access to news and information by developing a more politically balanced, editorially independent, professional and viable media sector that reaches audiences across Georgia through diverse delivery channels.

Lia led IREX’s USAID-funded Media Innovations Program in Georgia from 2002-2006, first as Deputy Chief of Party and then as Program Director. The program helped improve the legal environment for media, the quality of professional journalism as well as the viability of media businesses. In addition, Lia has worked with IREX Europe as Senior Georgian Media Advisor on the EU-funded Media Strengthening Programme, and with the BBC World Service Trust as Project Director on the EU-funded Community Radio Project in Georgia. 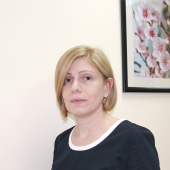