Ahmed Ben Nejma is young activist with over seven years of experience working with Tunisian NGOs. In 2012, he participated in the Tunisian national environmental advocacy campaign "Protect" which resulted in the enacting of new laws in the Tunisian constitution to protect the environment. In the same year, Ben Nejma was a member GDA Sidi Amor, a local NGO working on Compressed Earth Bricks projects related to construction techniques for ecological houses in Tunisia. He also worked with the Tunisian Association for Management and Social Stability to empower women on entrepreneurship skills. In 2013, he experienced his first international experience with the Vermont Workers Center in Burlington, Vermont and 350 Vermont to advocate for environmental rights. In 2014, he joined The Associative Action in Tunis to implement the Participatory Budgeting in Tunisia as his follow-on project. Today, Ahmed is a national expert in the Participatory Budgeting Process. He is training and supporting local NGO members and government officials in 11 Tunisian municipalities to implement the Participatory Budgeting in their local communities in order to help construct a trustful relationship between citizens and the government institutions, which will contribute to the development of his country after the revolution. 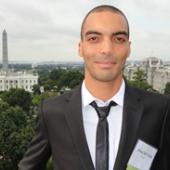